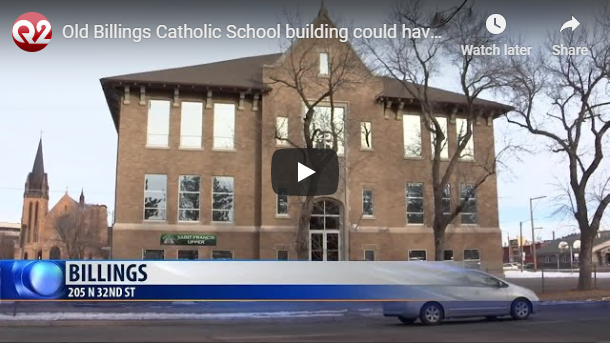 BILLINGS – The century-old St. Francis School building in downtown Billings will likely have a new owner.

Harrison Fagg, who developed the Granite Tower across the street, and his son, Russ, a former Billings district judge, plan to purchase the building on North 32nd Street.

Russ Fagg said there is a lot of history and memories in the walls of the Fratt Memorial school building, which is why they plan to keep the building as is.

The building was completed in 1918, and Fagg said despite its age, it only needs a little cleanup to the exterior.

“Well, the building is 100 years old and we think it’s a really nice looking building,” said Fagg. “It’s a really solid building. There’s not a crack in the foundation, so God willing, we can have this building around for another 100 or 200 years.”

Fagg said that while they are still working on plans for the rest of the nearly half-block lot, initial ideas include apartments or condos with underground parking.

The building was used by the Billings Catholic Schools through the 2016-2017 school year.  K-8 students now attend school at the new St. Francis building, which was completed in the summer of 2017.
Article taken from:
https://www.ktvq.com/news/local-news/2019/01/10/old-billings-catholic-school-building-could-have-new-owner/